Filmmaker David Lynch swears his daily practice is       crucial to all his creative work.

I am not particularly good at this one myself.

Kai Roer in www.bebetter.no and I are working together in trainifique.com with mentorprogram and trainings.

Kai is an expert on motivational trainings and had worked up an 30-day series on things you can do to get more motivation and more creativity. The series will start this week, and go on daily for 30 days.

Please contribute with your ideas and comments too! The more we share, the better!

How much time do you use to plan your career? Is it more than your planning time for next years vacation?

Now I am testing to send a blogpost from my iPhone. Hope it goes well. 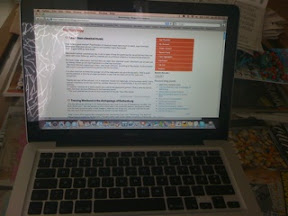 How to be a good mentor? Practitioners of classical music have much to teach, says musician, Norwegian Champion winner in tennis and scientist Ingrid Røynesdal.

Røynesdal believe corporations has much to learn of how the sportcoaches reveal the best from the atlets with close follow-up, and the coaches put up ambitious programs for personal development.

But even more, she meens that business can learn from classical music. Musicians can at least just as closely follow-up and learningmasters is other top-musicians.

The most talented supporting a mass, very tough criticism, according to Røynesdal. A piano master who coach a young and promising pianist, can be merciless.

It is also common to throw the younger out of the deep water and give her big tasks. That is good – but the premise is that the younger generation knows that her talent will be fully seen and recognized.

Talents are spur of the criticism, if it is reasoned, honest and legitimate. In the business world, I have noticed a tendency to not say anything, perhaps because it is uncomfortable. It is much worse, she believes.

In addition, mentors for a talent should take care of the pleasure to perform. That´s were the pianist looks the most obvious difference to the business sector.

– The most talented are driven by their enjoyment of the job, "says Røynesdal.

The day before the training in JCI Gothenburg we went over to the city of Gothenburg, my wife, Lina (from Syria) and I. We had booked us into a nice hotel in the center for relaxing, enjoy and to show Lina the town (since my wife is from Sweden). After the tour of the city, Lina and I had time to plan the next day’s training before it was time for dinner in a town restaurant.

After 1 hour’s drive against the norwegian border, the training could start. The training "The Big Five" with Lina as co trainer for the first time. The participants were quickly tested himself as a mentor and mentee. The training is specifically structured so that there is so little time as possible to the theory and explanations, but a lot of time to practice. The first exercise where the mentee will talk only and mentor to listen (and do not show any signs to follow, or say something) is a practice that creates an aha experience. Here is where the importance of body language and to follow and immerse themselves in conversation.

Then, we went on where the mentor in the next exercise could ask questions, and here things is starting to fall into places. And all are amazed at how quickly time passes. Last exercise is where the mentor can come with questions, feedback, and not least, the mentor should try to get the mentee to reach a deadline. "When are you going to…"

The exercises and not least the number of exercises will allow participants to get tested as a mentor several times, and that is the meaning. Learn it and do it!

On the way, we had several discussions related to the exercises and how they think it was and if the mentee thought that the mentor did well or something that mentor could improve. But all the trainings come to an end and unfortunately this also did, after four hours it was over and the participants an experience richer.

After a training people will always be discussing things or ask more questions, so also this time. And as trainers is Lina and I especially happy when the participants are telling us that this was a surprisingly practical training. And that was what made it special and good, namely that the tools they could now go out in life and use. Already the next day, they actually could start to be a mentor on the job or in their spare time, or perhaps in the marriage.

I hope that some of the interesting ideas that emerged in the training becomes a reality, that JCI Gothenburg start a mentor program. That way, more people could get even better personal development and achieve their goals.

THANK YOU, JCI Gothenburg, Thank you from Lina and Thor-Erik.

I come over this community for people who want to share their unique skills with others.

I sign up for a membership today, it´s free, I´m looking forward to try it.

My partner in Trainifique ( http://www.trainifique.com ) visited the largest radiostation in Norway for an interviewed yesterday (27/5-09) to talk about his nomination as the Most Outstanding Trainer in Europe 2009.

Read more and hear the program (sorry, it is only in Norwegian) in his blogg: http://www.bebetter.no

Joining a mentoring program is a very powerful tool that can help you reach your potential because of the training and empowerment it provides. Mentoring is also one of the most effective ways for you to advance in your career because your skills are developed and your performance is monitored.

In short, mentoring enables you to be the person you really want to be.

A mentor will help a mentee believe in his or her capabilities as a person. Because of this, the self-confidence of the mentee will be improved and they will be more apt to accept more challenges in the future. The mentor would also enable the mentee to explore new ideas so that you can achieve a higher level of self-assurance in yourself and explore even greater highs of success. The mentoring program will be an opportunity for you to take a deeper look at yourself, your goals, your personality, and your life. This will enable you to know which the right path you should take in life is.

I found this on http://www.linkroll.com/mentoring/ and it was so good written and described.

I really did like this, it`s like the KISS method. Keep it Simple and Stupid, well maybe not stupid, but so easy that everybody can do it. I did read the rest of the article/blog to Seth Godin at http://sethgodin.typepad.com/

"Flying a plane from one city to another, on time, is incredibly difficult. There’s a million things that can go wrong. And yet, for years, the airlines worked hard to make it appear easy. They wanted to appear competent and to make us feel safe.

The other day, as I waited for a flight, I heard the dreaded announcement. The flight was delayed, there was a mechanical problem. Angst filled the gate area.

Five minutes later, they announced that the problem was fixed, and we could board… we ended up leaving ten minutes early. Joy throughout the land!

Where did the joy come from? It came from the rapid shift in expectations. For a moment, the airline made it look hard. then they did the trick and we were saved.

Houdini never said, “check out these trick handcuffs and watch how easy it is for me to take them off.""

I`m not quite sure about the airplane like a picture of this, because you want the airplane to be riskfree. And to fix a problem in four minute is…